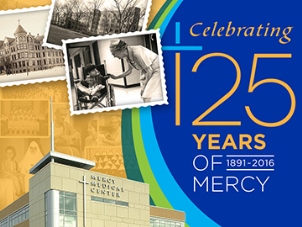 Between now and the final celebration in September, we will share some stories and facts to show how far we have come in furthering the vision of the our pioneering Sisters.

In Mercy’s long history, who was known as “the Miracle doctor”?

Scroll down for the answer : 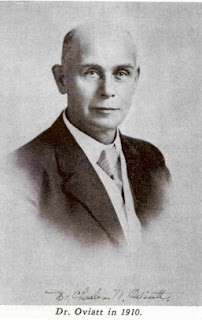 Early in his career, Dr. Oviatt  became known as the "miracle doctor", mainly because he could successfully remove cataracts. This was a very delicate operation, which he performed under difficult conditions with old-fashioned instruments.

More about Dr Oviatt [From the Mercy Hallmarks of History display at Mercy Medical Center in Oshkosh, WI] :

Dr. Charles William Oviatt was considered the best surgeon and medical doctor in the city. When he became a member of St. Mary’s Hospital (forerunner of Mercy) in 1894, he brought great prestige to the institution and attracted other physicians as well. He was a personal friend of the Mayo brothers – Charles and William – who were as famous in Rochester and beyond the state of Minnesota, as Dr. Oviatt was in Oshkosh and beyond the state of Wisconsin.

Later, Dr. Oviatt performed the first appendectomy in Wisconsin. His patient was an eight year old Fond du Lac girl, and people were shocked to find that he would "use the knife" on one so young. Furthermore, they didn’t think it was advisable to be operating in a hospital, instead of the girl’s home. But the operation proved successful, and people began to change their way of thinking.

Dr. Oviatt went on to play an important role in developing St. Mary’s Hospital. He himself paid for the equipment in the new operating rooms, aiming for "the last word in modern surgeries and laboratories". It was there that Dr. Oviatt performed the first goiter removal in the state.

Dr. Oviatt’s renowned success as a surgeon, as well as his profound kindness, attracted patients from near and far. People from out of town were brought to the hospital on stretchers in freight cars. Once, after Dr. Oviatt had diagnosed another doctor’s patient, the lady said to him, "Doctor, I leave it entirely to you; do what you think is right and best". The patient’s doctor, astonished at hearing this, said to Dr. Oviatt, "Say, Dr.,Oviatt, why is it that people have such great confidence in you the minute they meet you? This patient never saw you before, and she is at once ready to put her life completely in your hands". Dr. Oviatt answered, "Well, don’t you know yet? That is because I am bald-headed."

Despite the humility, Dr. Oviatt possessed a great sense of knowledge and wrote many papers describing his medical advances. As a result, he earned numerous honors, including election as one of the fifty members of the Society of Clinical Surgery.. This was an organization for the younger medical men of prominence in the United States. To qualify for membership, a doctor must "have discovered some new method of performing some kind of an operation". Many of Dr. Oviatt’s writings were termed "standard authority" at the time of his death.